Gone are the days of elective computer sciences classes that only a few students choose to enroll in. Now that we are walking into a more digital society, kids need to learn more than just how to click “Save” and make a PowerPoint presentation.

In fact, education experts now suggest going past typical computer literacy programs and moving into more advanced computer science curriculums – mandatorily. This is where the movement to work on computer programming comes into play. 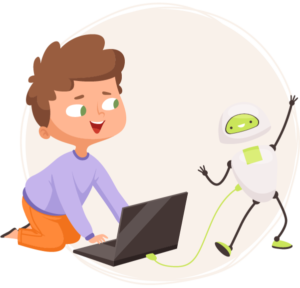 So whether you’re a parent wanting to make sure your child stays ahead of the game or you’re looking to pump up the local school’s curriculum, we are going over the top 11 basic programming languages for kids.

Why basic programming languages are beneficial for kids?

There are two fantastic reasons why you should be enrolling your child in a coding course. The first and most obvious – we live in a digital world. Knowing how to code is an ever-demanding skill, even for people who aren’t necessarily software developers.

Just as everyone needs to know how to work office management systems now, eventually all people in the workforce will need to understand coding. So by helping your child out early, they’ll quickly become familiar with the foundations of this technological necessity.

Secondly, Coding as a subject is enormously helpful for your child’s overall education. It helps teach them logical, mathematical concepts, and language skills. Of course, the end goal is usually to work on software development, but the skills your child will develop are transversal.

Now here is the next step – figuring out which programming language to teach your child. There are literally hundreds of different coding languages that your child can learn, each with its own pros and cons.

With that in mind, here are the top 11 basic programming languages for kids:

Blockly is a visual block programming language that was designed by Google specifically to teach children the concepts of coding. It’s at the very top of the list for a reason.

The platform has an incredibly easy-to-use interface, making use of bright colors, intuitive interactions, and a drag-and-drop system. All kids need to do is choose the block and move it to a blank space in order to create sequences, loops, or any other coding concept.

It’s a very visual way of learning coding basics that eliminates possible technical errors through the use of these blocks. Since Blockly is made up of several different coding languages, beginners don’t need to worry about coming across any glaring issues.

The best part of Blockly – it can be used to create an actual app. That’s right,  even though it can be used as an educational tool, it’s completely functional as an app builder.

Alice is similar to Blockly in that it’s a visual programming tool to teach children the basics of a programming language. In this case, Alice uses an interactive coding environment to teach C++ so that children can develop animations, narratives, and simple 3D games.

Developed by Carnegie Mellon University, what makes Alice so unique is the ability to manipulate 3D models and use more interesting camera angles within the platform.

A great feature of Alice’s platform is the ability to transcribe the text written in the coding blocks into a real text-based programming language (either JavaScript or Python). So once children are reading to move onto a more difficult project, they can simply translate their code and keep pushing forward.

Java makes it onto this list for one huge reason – Minecraft. That’s right, that block-ish video game with all the merch your kids want you to buy.

Minecraft remains one of the most popular games of all time and is developed completely through Java. And the developers at Mojang have released several adaptations to the game with the goal of teaching coding. In fact – Minecraft is pretty heavily invested in the educational properties of video games.

The main game involves creative thinking skills, open-world exploration, problem-solving, and visual-spatial skills. All of these are logically quite helpful for children. However,  Minecraft gets an extra point for having an open-source code.

This means that kids can modify the game however they like. From adding in new “blocks” to changing existing ones, Mojang encourages children to learn, explore, and enjoy coding.

Scratch is an educational programming language developed by MIT and is one of the most well-known visual block-based coding languages. It’s perfect for children and beginners and boasts a highly intuitive interface.

This interactive platform features a large amount of freedom of expression, combining it with an engaging interface and a simplified procedure to keep kids motivated during the learning process.

Like some of the other block-based languages, Scratch removes any technicalities involved in the language – and instead focuses on the concepts. This way, absolutely anyone can learn how to code without being bogged down by all the minutiae at the beginning.

And by the way – there are already over 70 million users on Scratch, meaning there is an enormous amount of online support for anyone trying to first get started.

Python is quickly becoming one of the most widely used and efficient programming languages out there. While it’s not block-based, it’s simple to use and gets rid of a lot of the problematic details of other text-based languages.

While you can utilize Python’s already-available resources to streamline coding, kids will still learn the crucial basics as they go. This makes it highly recommended for younger kids and for older kids who are getting serious about using their coding skills.

Since it’s an efficient language used both in education and in practical app development, Python is definitely a language kids should start getting used to.

Not to be confused with Java, JavaScript is another coding language that is great to learn, mostly because it’s used on every web browser (like the one you’re using to read this post!).

This means that JavaScript is essential for anyone who wants to get into web development. So it’s a very practical choice for anyone unsure of where to start.

The downside of Javascript is that there is a lot to learn. It might be simple, but it’s still a monster of information to take on. So make sure you consider that before choosing one of these courses for your child.

C# is a programming language specifically used to create high-quality games in the Unity game engine. Users on the platform can add elements and manipulate 3D objects.

C# is certainly one of the more difficult languages to learn, but it is now the primary language for Windows app development. This means that if your child wants to create their own game or move onto a bigger project, then C# will eventually be a necessity.

To be fair – HTML isn’t actually a programming language, but it is a foundational element that is part of other text-based languages like JavaScript.

If you’re looking for something simple to teach the basics of text-based languages in website building, then HTML is a great place to start.

Ruby was designed specifically to make complicated concepts as simple as possible. It utilizes clear syntax and a straightforward design to generate a simple and enjoyable coding experience.

As an object-oriented programming language, it’s able to carry out complicated procedures in a simple way, making it perfect for kids to learn the basics without getting overwhelmed.

Once your child starts to get the hang of it, they can move onto more complex concepts like procedural coding, as well.

BASIC was one of the first groundbreaking programming languages that new computer owners used to get into.

Unfortunately, it’s almost obsolete as a computing language these days. This means that its best application is now as an educational tool. It’s an incredibly simple language that is perfect for kids to learn some basic programming concepts.

Even though it might not be at the forefront of any up-and-coming technology, the basics are the basics.

Want to move on from software-only coding and see how coding works in the physical world? That’s exactly what LEGO Mindstorms does for you.

Its simple interface teaches kids how to build robots using code. This makes it a fantastic tool for kids to see the practical results of their digital efforts. Parents can have their kids go through simple courses just to make some fun designs at home or even encourage them to move on to international robotics competitions.

If your child is really interested in robotics and coding – then this is the place to start.

It’s never too late to start – and almost never too early, either! Even though adults might not have a lot of experience with these seemingly complicated topics – kids are fast learners! You’ll be surprised how quickly they master coding languages and want to move on to more difficult topics.

So go through a few of the programming platforms and languages on this list and figure out which one works best for your kid. Whether they want a visual platform like Blockly or something more complicated like Java, they’re sure to be up for the challenge!