Do what they do

Your best French teachers will be the French people. When they speak, listen carefully to their pronunciation and sentences, and repeat them as much as you can — you’ll often pick up native speakers that aren’t on the books! At this stage, there is no need to add your own ideas to the sentences. The most important thing is to practice and develop a natural reaction so that when you encounter a similar situation in the future, you will naturally say it.

French learning apps on mobile phones are already getting popular. Using mobile phones to learn French won’t be limited by time and region. You can learn French whenever you want! You can take a look on your phone on the bus or subway. These apps are usually cheap or even free.

Watching French movies and turning on the subtitles is a very popular way to learn French for beginners. Those who have learned French know that reading French is very easy but listening and speaking are more difficult for them. Through French movies and subtitles, you can know the French you hear with short French sentences, which can effectively improve your listening skills. Of course, if your English is good enough, there are many English movies with French subtitles. Compared with Hollywood, French films have distinct national characteristics, including comedy and drama films are very good!

Listen to the news broadcast

This is an advanced version of the previous tip, audio-only. Without the help of images and subtitles, will be your next challenge. Newscasters usually have a good French accent. Radios France is an APP used to help students study nearly all of France’s news radio stations.

Bring yourself back to your childhood and watch cartoons!

Animation in addition to entertainment, also helps children learn the effect of language. As a French beginner, you may not keep up with the rhythm of French movies and broadcasts. So, the animation is very suitable for you, because the word choices and sentences in the animation are relatively basic, and the speed is slow. Most of them are generally with subtitles. It is very suitable for very basic French learners to get started. You can learn many plain words and phrases. The cartoon was very popular at that time.

If you’re in France, try puzzle games. You can often see people killing the time by playing puzzle games on the subway. You can find those games in many newspapers in France. If you are not in France, you can try to search for them online!

Let learning be your daily routine

Take a daily French phrase note on your mobile notepad every day. You’d better take notes of it to know what situations to use them in and try to use them throughout the day. You will be able to communicate with native speakers once you get used to it!

The French are outgoing and love hosting parties. Like those in China, the associations in French schools often offer language-exchange programs and other similar activities. So, if you’re already at a French school and want to learn French well, try to join in!

If you love cooking, learn how to cook and check out recipes in French. Not only will you learn a lot of vocabulary, especially the food names, but also you can read the menu easily to decide what to have in a French restaurant! Of course, you can also get to know some words of foods in French. Best of all, you’ll be able to cook delicious French cuisines!

Maybe it sounds weird but it’s a useful tip: If th

ere is no French or French learners around you, or you are shy to speak French with others, you can try to speak French with yourself. For example, talk about how your day is going in French. Since it is straightforward, there will have no logic required between each sentence. You only need to find some keywords to build a sentence. Besides, you will be more confident if you keep talking to yourself in front of a mirror!

The best way to learn French: Practising with your French boy/girlfriend:) 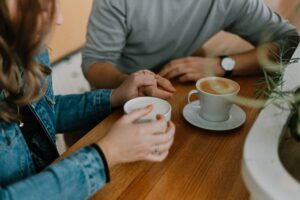 This could be the best way to learn French! If you have a French boyfriend/girlfriend, your French skills will be definitely improved! The person who is close to you will love to practise your French every day. Most importantly, he or she won’t laugh at you. They will be patient and listen to you carefully no matter what you said. Moreover, you will be passionate to learn French harder because you want to share more thoughts with him/her!