Now more than ever, parents are looking for the most effective ways for kids to learn to code. And that’s because coding plays an integral part in all of our lives!

We’re smack in the middle of another technological revolution. This digital age has shown all of us that the ability to code is slowly becoming a basic skill. Just like when the first Typing classes were introduced in the 90s, coding is started to become a core concept for school curriculums.

But if your child isn’t learning this in school – they might be missing out on key life skills. This means that it’s your job as a parent to teach them the skills they’ll need to find success.

In this article, we’ll be going over everything you need to know about coding as a parent, plus the best ways to learn to code for kids! 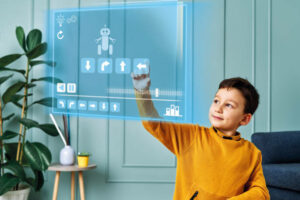 Although it may seem like it, there’s nothing magical about coding! Coding is simply the process of using a programming language to make a computer complete an action.

This can be as simple as creating the code to add text to a website. Or it can get as advanced as building a robot that undergoes complex actions!

So as you might imagine, there are a lot of different ways you can approach coding. Whether you want your child to learn the basics or you think they might be interested in an advanced engineering degree one day, coding is for everyone.

In fact, even if your child eventually becomes a teacher or a doctor or a plumber, coding will teach them valuable skills that will set them up for success!

Why should kids learn to code? 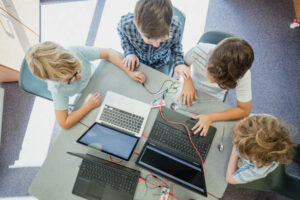 Before we move on to any more specifics about coding, let’s look at some of the many benefits of learning to code for kids.

This is one of the most obvious benefits of coding. Whether on a computer or out doing something in the real world, the process of coding helps your child develop their problem-solving skills.

That’s because the very heart of coding is breaking a huge obstacle into small, manageable steps. So rather than becoming overwhelmed by a big problem in their life, they’ll be able to take a step back and analyze the big picture.

This ability to handle complex problems is a talent that will take them far. Coding obviously isn’t the only area in life that requires problem-solving skills. From organizing their daily life to doing something like planning their wedding – this computational style of thinking is a life-changing skill to develop.

Now you may be thinking – computational, rigid, mathematical skills don’t seem to be related to creativity.

But that’s a common misbelief!

Anytime your child is learning about computer science, they’re working on improving their creativity. That’s because coding empowers your child to use these building blocks to create ANYTHING.

Think about it – coding is what makes video games, apps, and social media possible. With some strong coding skills, your child will be able to make a world of digital media.

And ultimately, it’s an excellent way for children to be able to express themselves. Whether they want to make a fun app or plan out an entire video game, computer coding naturally leaves room for a LOT of creativity.

Now while these soft skills are clearly essential for your child’s success in life – we need to be a bit pragmatic, as well.

Because creativity isn’t always enough to secure a great job. However, being able to understand multiple programming languages is a GREAT asset to have on a CV.

And with coding becoming ever more in-demand, the sooner you sign your child up for a coding class, the better! Because the tech industry is one of the most lucrative, fast-growing sectors out there. And that’s not going to change. 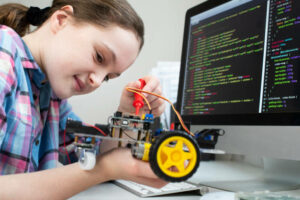 So now that you’ve had a taste of all of the benefits of learning to code for kids, it’s time to start thinking about what actually to learn.

Because just like in human languages – there are TONS of programming languages. Each of them has its pros and cons, but here are some of the ones we recommend you consider for your child:

Scratch is a programming language specifically designed for kids by the team at MIT. It’s a highly-visual, drag-and-drop language that allows your child to be introduced to coding.

Your child will be able to create stories, comic books, and even short animations! And while it’s not a language they’re likely to use at their future job at Microsoft, it is an excellent introduction to the world of coding.

This is a great option for kids in middle school since it’s a fully-fledged computer programming language, but it’s still beginner-friendly. It uses a coding system that is easy to read but is more advanced than something like Scratch.

And Python is one of the most in-demand skills out there! So this is absolutely a must for your child.

Lua is another one of the best programming languages for kids to learn. It’s quite visual, just like Scratch – but far more complex. Lua isn’t the most common coding language on the list, but it’s growing in popularity.

This is one of the best options for teenagers, especially for kids who love video games. That’s because Lua’s complex visual style naturally leads to a way to create video games.

This coding language is great for creating 3D worlds, video game scripts, and even a full game! In fact, this is the preferred language for Roblox, with their top designers earning 7 figures a year!

So if you’re looking for a way to combine visual interest with a stable future career, Lua might be the best choice for your child.

You’ve almost certainly heard of Java. That little program that used to constantly update on your computer?

Well, that program that is the core of every early 2000s computer is still based on one of the most popular coding languages today.

Unfortunately, it’s also one of the more complex languages. But that shouldn’t demotivate you because sometimes the most difficult tasks are the most rewarding!

Proficiency in Java is one of the most in-demand skills in the tech industry. In fact, if your child ever plans on taking the AP Computer Science exam – learning this language is a must.

Even having your child learn some of the most basic components of Java is a great idea. That’s because this computer language is one of the foundational skills for learning how to understand just about any language.

So challenge your child to learn this elementary skill and they’re sure to reap the rewards!

In fact, it’s currently one of the most common languages out there. So if you’re looking for a language to learn to code for kids, then this one should be at the top of your list.

Admittedly it’s much more complex than something like Scratch or Lua, but it’s the base of tons of software, games, and applications. So if your child really is interested in pursuing a career in tech, then this is probably the right decision for you.

It’s also the most similar to what you’re probably thinking of when we say “language”. It uses a lot of logical strings of code to have to create commands for the computer.

And while it might look a bit overwhelming at first, it’s a great way to teach your child the ability to look at the big picture and develop those problem-solving skills!

Resources for Kids to Learn to Code Finally, now that you know a little bit more about what coding is, it’s time to find some resources that your child can use to actually learn it.

Of course, there are MANY ways your child can learn to code. From Youtube tutorials to classroom-style games, the possibilities are endless.

So let’s look at just a few of the best resources to learn to code for kids:

Yes, named after the programming language itself, this MIT-based resource is an excellent way for your child to learn the basics of coding.

This is a great resource for younger children since it’s a visual style of coding. While it’s unlikely to teach your child how to instantly create the next TikTok or Facebook, it does help them develop the thinking skills and fundamentals of coding.

So, step by step, right?

Scratch is a great platform that will teach your child some of the basics, without ever needing to look at a line of code. And with this gamification teaching method, your child will stay motivated and actually enjoy the learning process.

And that’s the key!

This is one of the most well-known education platforms out there to learn to code for kids. It teaches your child how to use CoffeeScript and Python and is easily adapted to use at home or at school (or at homeschool!).

Code Monkey is a bit more course-focused. So your child will work through different modules to learn the basics of coding. But the good news is that it uses interactive challenges to keep kids interested and motivated in the learning process.

If your child has already learned some of the basics, then you can simply choose a more advanced course to have your child dive in. This level of flexibility makes it one of the best platforms out there!

As strange as it seems – you can teach your child some great ways to learn without ever putting them in front of a computer.

That’s right – they can learn the basics of coding without any electronics.

That’s because, at the end of the day, coding is all about logic! And with that in mind, there are plenty of board games out there that help teach your child how to code in a fun and interactive way!

Think Fun is one of the most popular coding board game companies out there. They are all fun board games you can play as a family – and learn some coding along the way!

Depending on your location, you might consider enrolling your child in a STEM program.

Most school districts and even libraries will offer some sort of afterschool program that teach the basics of coding.

This is a great way to teach your child to code AND let them socialize at the same time. And even though you might not think so at first, coding naturally encourages cooperative thinking and team building, so community-based programs are a great addition.

And if you live in a rural area with no local options, you can always consider an online STEM program.

Speaking of – an online coding program might be the perfect solution for you! Considering that coding is ultimately used with technology, it’s only natural that you’ll find some great online programs, too.

From subscription-based programs to Youtube videos to our own online coding program, there’s a nearly unlimited number of resources out there for you.

So don’t let your location limit your child’s ability to learn to code! With the internet, anything is possible.

Don’t be afraid to take that next step and sign up for our online coding program! We’ll teach your child everything they need to know, and then some.

Reach out to us today to learn more about some of the best ways we can help your child learn to code!