Spanish currently has 480 million native speakers worldwide, making it number two (behind Mandarin Chinese) in terms of native speakers. Which means that almost anywhere you go, you’re really likely to meet someone who speaks Spanish – and this number is on the rise! 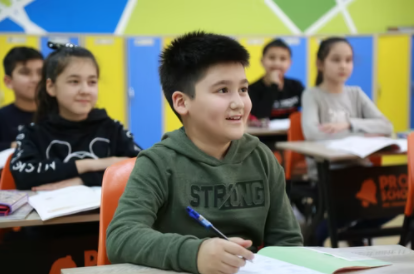 Here are the top 5 reasons why you should be enrolling your kids in a Spanish class today.

1.Being bilingual has cognitive benefits

If there is one thing that linguistics agree on, it’s that the cognitive and academic benefits of learning another language are huge. Research shows that bilingual students have an improved working memory, motivation, academic performance, and reading skills in both language.

In fact, not only does learning Spanish help your child communicate in another language, it also will help them perform better in school than their monolingual peers. Some studies even show that bilingual students achieve better scores in non-language subjects like math, as well.

So not only is there a large boy of research suggesting that learning Spanish will improve your child’s cognitive abilities, it also suggests that it will help them as adults to prevent cognitive decline, i.e. dementia.

Still on the fence about signing your child up for that Spanish class, now? Probably not, but just in case, this list is just getting started.

Maybe you haven’t had the best experiences yourself learning a language, but it’s true that Spanish is widely considered to be one of the easiest languages to learn for an English speaker.

Think about it: Spanish shares a lot of vocabulary with English, the grammar isn’t very complex compared to other common choices (looking at you, German), and the spelling and pronunciation is super straight-forward. The Foreign Service Institute of the US State Department has a chart on measuring how difficult it is for English Speakers to learn to speak a language.

The FSI considers Spanish in the easiest category, taking approximately 600 study hours to learn to speak effectively. Compare that to the 2200 for Japanese!

3.It improves your understanding of English

If your child has to go through the effort of learning another language, it can help them understand English better, as well. This advantage is especially great for older kids.

After spending countless hours studying grammar, learning about objective pronouns and subordinate clauses, you can bet they’ll be able to learn what those mean in English, too! So while you may not understand what those words are (especially if it’s been a while since your last English grammar lesson…) then you can be proud of your child for easily understanding them.

That explains how those polyglots do it! They’re not just genius language prodigies, they just put in the time to study and it got easier for them after each one.

Let’s be honest – there certainly are practical benefits of learning Spanish, as well. Being able to write bilingual on your resume is one of the biggest eye-catchers there are in the job market.

As the world becomes increasingly more globalized, effective communication skills are a must in almost any job market. In fact, 43% of the world population is bilingual, while only 40% are monolingual. So if you want your kid to be on the winning side – sign them up now!

Spanish is considered to be the 3rd most used language in communications worldwide, meaning the business opportunities to use Spanish are limitless. And not just in countries where Spanish is the official language, either. Did you know that there are more native Spanish speakers in the USA than in Spain?

That alone might make you reconsider why we still call them “foreign” language classrooms.

5.Opened up to a world of cultural opportunities

Getting a good job isn’t the only important thing in life, however. It’s even more important to grow into an open, well-rounded person. Learning Spanish can offer you child just that.

They’ll be able to experience new cultures, new foods, new movies, new places, new ways of thinking. Your child will be able to engage with classic novels and movies in the original language, without losing anything in translation. They’ll be able to introduce you to traditional dishes they learned abroad. Who knows, maybe they’ll even meet the love of their life thanks to Spanish!

The benefits of learning Spanish are limitless – your child will only gain opportunities from learning a second language.

If you have the ability to present your child with all these amazing opportunities, is there anything holding you back? If you can’t enroll your child in Spanish classes, there are a ton of online resources for you to take advantage of – podcasts, Youtube videos, online worksheets, free apps, TV shows and movies, and of course, Classover.

So go ahead and give your child the chance to learn Spanish. The benefits of learning Spanish truly are uncountable, but hopefully these reasons were enough to convince you to try. And despite what people may say – it’s not too late for you to learn, either!